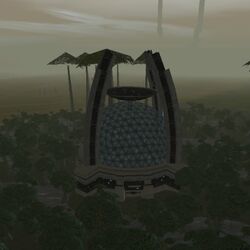 The Biodome raid is considered probably one of the most difficult high-level raids on Rubi-Ka, and frequently fails due to ill-preparation and poor management during the raid. It requires a high level of cooperation and knowledgeability of the details of the raid on the part of all raiders in order to complete. It consists of basically two parts divided into several phases for the purpose of this guide: collecting the parts to and assembling the actual key to get inside of the Biodome, and then entering the Biodome and killing the one boss inside.

The Biodomes are located in two playfields, Belial Forest, and in Southern Artery Valley, with the Omni version being in S.A.V. and the Clan version being in Belial Forest. There are three different biodomes in each playfield, located at various locations throughout, in the swamp or forest areas. They are easy to find as they are isolated and very large dome-like structures. (The nearest Biodome from Outpost 10-3 is located slightly to the southeast from the whompahs, and is typically where most Omni raid.)

To prepare for the first phase, you will typically need about 1-2 teams of level 200+ players depending on how powerful the players are, with at least 2 docs and a tank-type (preferably enforcer).

Map for all important places Edit

Phase 1: Get the key to the BiodomeEdit

Your raid force needs to kill 3 Ressurrecting Swamp ladies (one is called Witch, one is called Hag, one is called Weirder) located at 3 different Biledrinker camps (labelled as Swamp Dens on Nepentheia's Huge Map, SAV)located throughout Southern Artery Valley near Outpost 10-3. This is for the Omni version only. There are 7 camps, but the witch will only be spawned at 3 of the camps, therefore you get one key part from each witch. You will need to scout the camps and find which 3 of the 7 camps the witch is located, one by one.

Notes for killing the Ressurecting Swamp ladies and the corresponding adds:

1) She has a pretty powerful AoE nuke (3-8k, NSD won't prevent it as far as I know) every minute or so, so the best strategy for killing her is to send an enforcer or someone with tanking ability in right near her, and have reflects in each team or RRFE distributed. Ranged weapon users should keep a distance out of nuke range, and melee users should be very careful. Docs should get nano range buffs from an NT if possible so they can stay out of range of the AoE. Docs might be best using Alpha & Omega (team complete heal buff) if there are a lot of melee weapon users in the teams. She will occasionally warp attackers, so docs should be wary of who's being warped in and whether they need heals from a possible AoE nuke.

2) After the lady dies, there will be a respawn process of roughly 4-12 respawns (this is random), each with corresponding swamp-type creatures and a central boss in each spawn. Follow 1) above however have an assisted caller direct the raid force to pick off the adds while the tank focuses on the boss. When all adds are dead, have the rest of the raid force focus on the boss again. Rinse and repeat until the final boss dies (he looks like a large, maroon biledrinker), and you can retrieve one of the three key parts with some additional loot (see loot table for phase 1 below).

The Ressurrecting Swamp Witch will start a process that drops the "ZN" part from a final boss, which is a giant biledrinker boss named Firebelly Smothern.

The Ressurrecting Swamp Weirder will start a process that drops the "OR" part, which is another giant biledrinker boss named Searing Raskor.

The Ressurrecting Swamp Hag will start a process that drops the "E" part.

(I would assume that the Clan version would be NO, PH, and EX most likely corresponding to the same key parts and bosses in the Omni version.)

4) The key parts will combine to form the word ZNORE on a Broken Key card. (The Clan version will spell NOPHEX.)

Once you have ZNORE key you can start the next phase at any of the 3 biodomes located in Southern Artery Valley.

Final boss drops of this phase:

Organize teams with one doc and one reflect giving profession (ideally - soldier or engineer) in each team. It's recommended that you form 3 or 4 teams; however, with experience it may be possible to do it with 1 or 2 teams with as many docs and high damage dealers as possible. It might be good to form a force as optimally as possible(great healing and great damage dealing) with as little members as possible in order to lower the possibility of human error.

Ideally a 210+ enforcer (for his massive HP and taunting ability) is needed to keep aggro and tank on the main boss in the biodome itself (enforcer should not mongo! only single spec 4 taunts). A soldier is a great secondary tank if an enforcer isn't available

Important note: Make sure at this point that everyone takes note of what type of damage their weapons or pets do, and bring a weapon of alternative damage type if it is possible. This will be come into effect later.

Phase 3: Get everyone their Pass and Enter BiodomeEdit

1) Hand the Broken key card to Biodome keeper at the entrance to the Biodome, and a fixed key along with a box of passes will be given to you.

2) Make copies of this pass that will last 30 minutes each by right clicking on the box of passes. One click = 6 passes.

A raid leader should hand one pass out to each person in the raid as quickly as possible, right-clicking once each set of 6 passes are handed out. There are a maximum of 30 passes that can be made, so the maximum number of full teams that can enter the dome is 5.

The 30 minute time-limit on each key basically means you have one or two shots at killing the main boss inside of the biodome because there possibly won't be enough time to get back if something goes wrong. (Unless you have more passes to be distributed from the box, then, just need to reform outside of the dome, and right-click the box of passes again.)

IMPORTANT: Make sure everyone has their pass equipped in one of their HUD slots, or they will be killed if they try to enter the dome without it equipped! All raiders must obviously enter the same dome.

Phase 4: Kill the main boss inside of Biodome.Edit

Once inside, to spawn boss, you right-click the fixed key card on a terminal near the 4 guard turrets. This will spawn the boss, Urqhart the Absorber, who basically looks like a giant oak tree. Note that this boss is probably the toughest raid mob boss you may ever encounter in AO.

General tips for this phase:

1) 210+ enforcer or soldier should be tanking this boss.

2) It's important to take down this boss as quickly as possible in order to minimize the risk of failure: it will be difficult for docs to maintain that level of healing, especially when Battle Group perks have been used up.

3) After a certain period of time and/or HP goes down to a certain amount, the boss will put up an almost constant 1000 damage shield, so docs need to be working their hardest to heal and not attacking. He will also AoE nuke periodically, which is unavoidable as far as I know.

5) Nothing that affects the area in damage or as a debuff should be used. This includes Shadowbreeds, AoE nukes, AoE debuffs such as calms/roots/snares, Enforcer Mongos (IMPORTANT) and AoE perks. This is VERY important to remember. This could draw aggro from the four defense turrets near the center of the dome, and they could start aggroing and killing random raiders. If this happens, it will effectively end the raid.

6) Doctors should not be attacking, only healing!! Doctors' focus needs to be healing only (with use of all available healing perks, items, etc), and not attacking, because they will have their hands full healing. Also don't want a doc taking dmg/reflect shield hits and have to heal themselves as well. If docs do choose to use DoTs, be sure that each doc uses one line only...for instance, one doc gets A line, another B, etc.

Retrieved from "https://anarchyonline.fandom.com/wiki/Biodome?oldid=16237"
Community content is available under CC-BY-SA unless otherwise noted.