Inside, the dungeon itself is in two main sections. The first and upper floors are the actual castle itself where is safe for any players (even omnis) due to it's 75% gas suppression. The many Knights guarding their castle will not fight anyone unless they are attacked. As soon as you enter the place, use the door on the left side and continue to a large room with pillars. This room will have a door on the south side that leads to a set of stairs to the basement of the castle. That is where the interesting part of this dungeon lies.

This place is for level 150+ players, for a few reasons. One is the PvP part of it, and another is the last boss that you will encounter. I would recommend lowering your graphics setting a bit to avoid any latency (lag) due to the possible high number of players and actions being made in the basement.

A few things and tips you need to know before you go downstairs.

These are the mobs you will encounter before facing Tarasque:

Ghasap's Minions have a chance to drop these items:

Now go back from the way you came and go deeper into the basement by going down a set of stairs. They will lead you to the first PvP encounter area. This specific room is called "the box" by many players, because of it's square shape and the boxes that lay in it. Both factions usually hold their ground here first to hold back the opposite faction. Defenders will be standing in two areas, right in front of the door into the room by boxes and around the corner by the door leading into the caves to cover more ground and eliminate any incoming rush of players.

It is here where the excitement starts, with one side holding their ground and another rushing to break through. But this is not the end of the conflict in the basement, at least not most of the time. As you go past this room you will enter the caves where giant lizards roam. At the end of the fist long cavernous corridor there will be a left and right openings, go left to travel towards Tarasque's lair.

The last room will be pretty large, with 14 Scarred Lizard spread out near the walls of the room. Most will not be in your way, so don't bother killing them. Now comes the second PvP encounter area. Usually players will stand near the door inside the room, waiting for the opposite faction to open the room and rush in. It is here where sometimes a last attempt to overtake the basement takes place (check the map).

In the middle of the room is where Tarasque will spawn in all her gigantic glory. I was lucky enough to participate in one of the regular raids which is run by the tnet raiding bot (I'm a member) from the Atlantean Server to take images of the dragon and players in action. 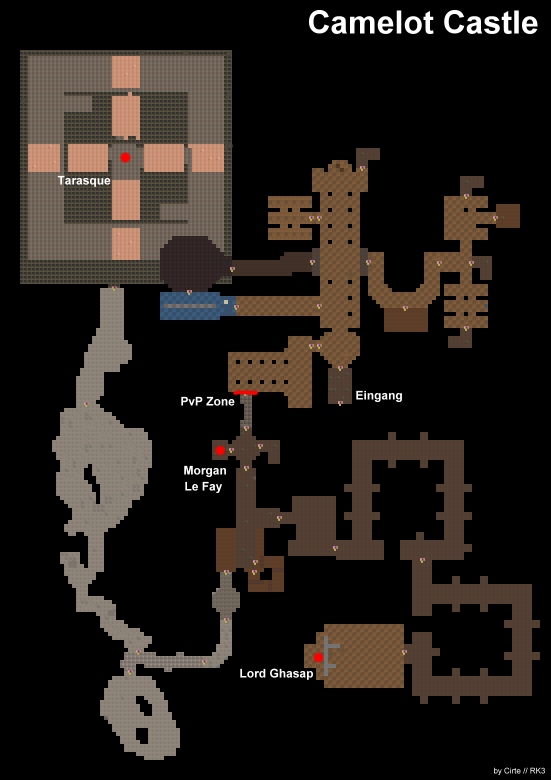 Retrieved from "https://anarchyonline.fandom.com/wiki/Camelot_Castle?oldid=15628"
Community content is available under CC-BY-SA unless otherwise noted.