The Condemned Subway is the first dungeon for newcomers to Rubi-Ka. It's made for low level players in the level range of about 5 to 25.

Entering the dungeon is limited to level 25 max; while you can stay inside the dungeon and level beyond that you won't be able to reenter it once you've left it with a level 26 or higher. Warping into the dungeon is blocked (at least for players past level 25).

The subway can be entered in ICC HQ in Andromeda. Prior to the 18.7 patch, there were also subway instances in Borealis, West Athen, and Rome, but these entrances no longer work. A random mission door in Newland City appears to be a subway entrance but does not lead to the Condemned Subway.

Note: If you want to explore the subway with friends, team up before entering the subway; the dungeon is instanced. Without being teamed you may end up in different instances, not seeing each other while being virtually at the same place.

The upper level(s) of the subway resembles a real subway station with shops, ramps and platforms. Guarded by Eumenides is the access tunnel to the lower, second part of the dungeon, which looks more like being part of a sewer (maintenance) system. As usual, the further you run into the dungeon, the more dangerous the mobs get.

Most of the mobs have standard loot, common to similar type mobs you find in missions and outdoors, including weapons, implants and clusters, first aid kits and so on

Additionally, you may find Living Cyber Armor parts, pieces for the first Ergo Ring quest, Eleet dolls and Morphing Memories, slot 1 NCU chips which can be leveled up.

See the description to the Quest for more info about the other Living Cyber Armor parts and how to obtain them.

The Violent Vagabonds drop the

There are several Striker named mobs in the subway which drop specific loot as well:

and their boss Striker Foreman (Level 19)

Map of the Condemned Subway[] 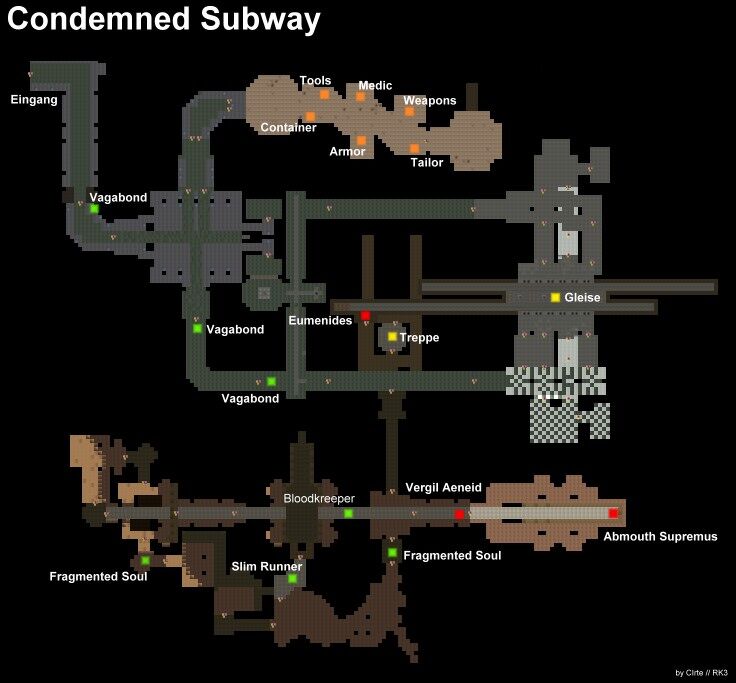 The map is outdated, need a new version with the new corridor.