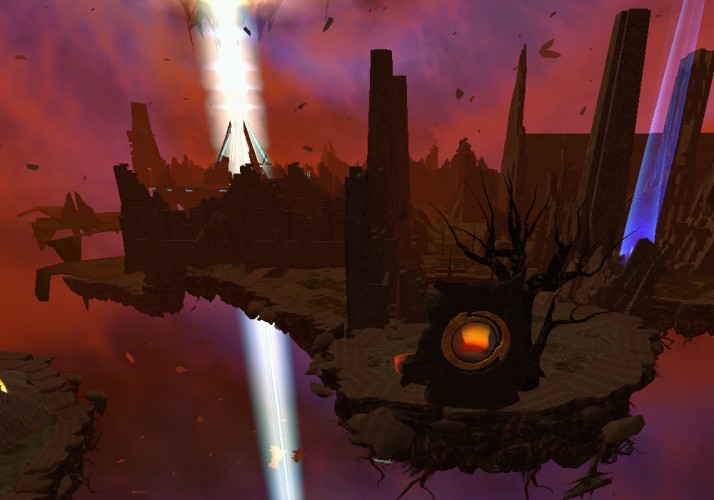 The Beast is raided alternately for 1 week each by Omni and Clan, followed by a week of FFA.

The following Raidbots are used:

The Beast is raided alternately for one week by Omni and Clan.
The following Raidbots are used:
schedules for raidtimes are posted on forum.

There are 5 different sorts of mobs in Pande.

These can drop this common loot:

Glyph of the Arcana

Poison Darts of the Deceptor

In Pandemonium there are 18 different bosses. These split into the following categories:

The portal bosses need to be killed to advance the Pnade raids.
The guard portals between the different Islands. Once they are killed a blue portal opens for a few minutes. Rightclicking these will zone the player to the next area.

These portals are onesided. To use them correctly you need to face south.

The names in order of these bosses are:

There are 4 different spawnplaces, which each can have one of 3 different bosses, resulting in 12 different bosses altogether.
The spawntime for these bosses is 6 hours and the type of boss is randomly chosen from one of the 3 possibilites.


2 of these spawnplaces (E/W) lie outside the nromal raid route to The Beast. The other 2 as well as the mdeium phatz boss are directly on it.
These mobs drop some very nice twinking items which mostly are nodrop and/or unique.

The second island has a medium phatz boss.
It has quite a few of adds and need to be treated carefully. If any players are going to the north of this boss, they pull in an additional number of adds "north", which quite often results in the end of the raid force. The respawn time is 6 hours and it is normally done together with Middle and North.
It drops twinking belts and high level symbs.

The final pandemonium boss is the biggest and most coveted boss in AO and has a little hole to itself. As we learned recently from ERgo in the inferno quests, it is the core of the Shadow Lands.
Thoughthe respawn time was formerly 18 hours, the 17.2 patch for LE changed the respawn time to 9 Hours
It drops a lot of very nice high level stuff. Most of it is nodrop and/or unique. 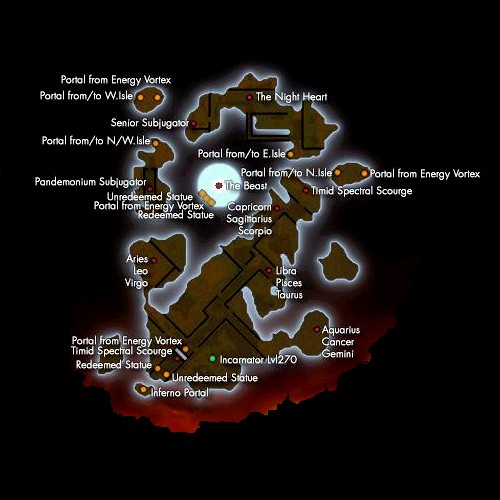 Retrieved from "https://anarchyonline.fandom.com/wiki/Pandemonium?oldid=17925"
Community content is available under CC-BY-SA unless otherwise noted.